I have been working with SQL Server Integration Services (SSIS) recently. In many ways, SSIS is counter-intuitive if you have been working with the database engine for long (more than a decade in my case). Working with SSIS is more like working with any other .net framework based programming language (C# or VB.net). Over the next couple of days, I will be writing about some of the salient aspects of SSIS which should be kept in mind in case you are working on multiple SQL Server technologies.

One of the key challenges for any system integration is to ensure that the enumerations  and “default” values used in the source system (e.g. sales statuses, product categories, etc) align between the “source” & “target” systems.

Once the values aligned during business, high-level and low-level designs, implementation of this cross-referencing in SQL Server Integration Services (SSIS) is done by a data flow component called the “Lookup Transformation“. The Lookup transformation effectively performs a join between the input data with a reference data set. If values match, they are available in what is called the “Match Output” whereas values that do not match can be made available as a “No Match Output”. However, this comes with a tiny counter-intuitive behaviour that I learnt about the hard way.

The lookup performed by the lookup transformation is case-sensitive.

In order to demonstrate the case-sensitivity of lookup transformations, I have developed a SSIS package that does the following in a simple data-flow task:

The query used to generate the static data in the OLE DB source is provided below.

The query used to generate the lookup values for the lookup transform is provided below:

Observe that in the static source data, not all values have a consistent case – some are in sentence case, whereas some are in small case.

The screenshots below show the overall setup of the SSIS package. 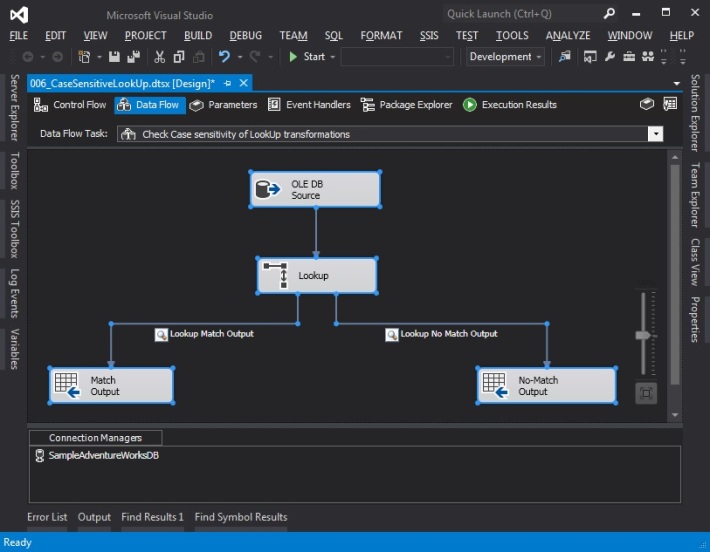 Notice here that we have used the text value from the source data (“RowValue” column) for matching/lookup to the reference data set. The reference Id is fetched to include in output.

If a match is found the “Match Output” should contain the matching row from the source combined with the Id from the reference/lookup data. This is seen in the data viewer output below.

When working with a case insensitive database, we often tend to take data quality with respect to case of the data for granted. Having data with inconsistent case has multiple repercussions (especially with data grouping in front end applications), but the biggest negative impact due to inconsistent case of text data is the inaccurate cross-referencing during a master data cleanup, system integration or data migration exercise.

Do take a few cycles in your development to take a look at your data quality, and if necessary, implement required data cleansing to ensure that your lookup data, enumerations and master data are using a case that is correct and consistent with the domain and business requirements.