When working with disconnected sources or remote systems in SSIS, source data is often received in the form of files. A common requirement is to rename the file once the data import/processing is completed.

I looked at the File System task in my previous post. The file system task appears to be the best way to implement this requirement. However, we run into something that is unexpected:

The “Move File” operation moves a file from one folder to another. It does not rename the file.

Let me leverage the same example as I had in my previous post. I have a set of files in a folder and an SSIS package that is configured to rename the files.

The File System Task in this package has been designed to use variables as the source and destination file names. The File System task is configured to perform a “Move File” operation.

Upon running the SSIS package, no files are processed and we run into an error.

“Could not find a part of the path.” error in the File System task “Move File” configuration

Could not find a part of the path.

If we change the operation type to the “Rename File” configuration, we can see that the movement is successful. 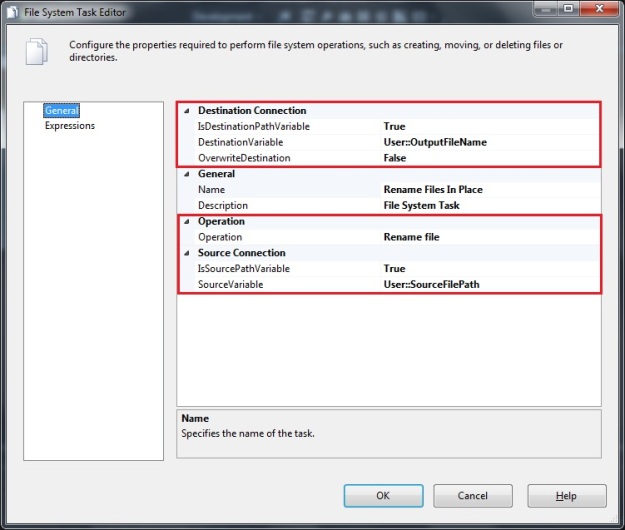 The reason is quite simple: “Move File” only moves a file – it cannot rename a file during the movement of the file.

In  short, one has to configure the File System task in a “Rename File” configuration if a file has to be renamed – irrespective of whether the rename is in-place or in a different folder.