We got a new server recently and one of my colleagues ran into an error when restoring a database. The error was a quite generic (reformatted below for readability):

My immediate reaction was to  review the restore script.

All looked well, I subsequently moved to the environmental aspect of troubleshooting. It was a new server and we had just created the target folders to which the database was to be restored.

We attempted to restore to the default database locations configured during SQL Server installation and the restore worked. So, one thing that became clear: the SQL Server service did not have appropriate security rights on the destination folder.

Once we determined that it was the security rights on the destination folder, the only thing remaining was to grant the rights. Here’s how we do it.

Here’s are detailed screenshots showing the above process. 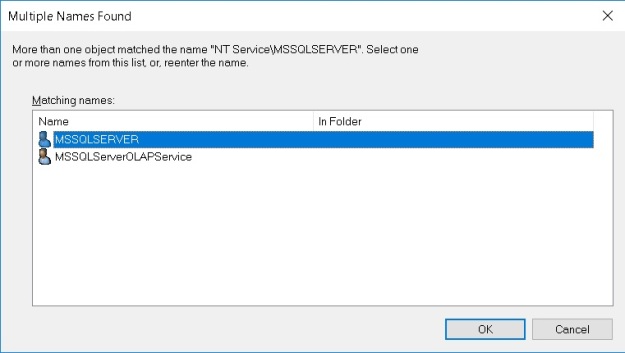 By the way: If you encounter similar issues in accessing your backup files, the root cause and solution are the same. Check the permissions on the folders housing your backups and you should  see that the database engine does not have the necessary security rights.

Maintaining permissions on data folders and appropriate registry entries is something that is handled by the SQL Server Configuration Manager when you change the service account under which  the database engine is running. If you use services.msc (the old way), this is not done and your SQL Server may stop working.

A few weeks ago, I ran into a question on one of the forums asking for a script that can help the team validate object naming conventions. Immediately, I was able to sympathize with the team.

What happens is that when developers use the graphical (GUI) tools in the SQL Server Management Studio (SSMS) or via a simple script, they often fail to specify a name to each individual constraint. These slips are not intentional – developers don’t often realize that each constraint is an independent object because they are ultimately related to  another user defined object (a table).

However, when a name is not explicitly specified for a particular constraint, what Microsoft SQL Server does is provide a name by combining the following:

While this format will always generate a unique value, it would generate names that may not be intuitive. It is therefore a common  practice to review the database code and review for compliance with naming conventions  that have been defined in the product/project.

This logic can be leveraged during code reviews/audits to identify objects where standard project naming conventions are not met.

To demonstrate the functionality of the script, I create one table with a wide range of constraints – none of which have a name specified.

Now, the following script is a simple string search that looks for strings ending with the hexa-decimal representation of the parent object.

I  hope you found this script useful. Please do  share your ideas/scripts that you may be using in your day-to-day activities.

As we have been discussing over the last couple of weeks, moving data from a “source” to a “destination” is the crux of SSIS. The data source can be literally anything – a SQL Server  database, a web-service, a script, an XML or even a conventional delimited file.

Picking up files from a folder and processing them is one of the most common use-case that I have seen. In order to avoid processing the same file over and over again, the most common requirement is to append the file name with a date-time value. In this post, I will provide an expression I use to achieve this goal.

Appending a Date/Time and renaming a file in SSIS

The easiest way to append a date/time value to a file name and renaming the file in SSIS is via SSIS expressions.

Put every simply – an expression is a formula, a combination of variables, literals and operators that work together and evaluate to a single value.

We can use the following expression to yield a date value:

This can then be appended to the file name and a simple File System Task can rename the file for us on the file system. Let’s see this in action with an example.

Assume a scenario where I have a set of files in a folder, and I need to do some processing on them. After processing, I need to update the file names with the date. For the sake of brevity of this example, I will not be performing any other operation on the files other than renaming them.

My folder containing the input files looks like this:

Now, I create an SSIS package that contains a simple For Each file iterator and a File System task.

For Each Loop configuration

The For Each Loop (configured as a file iterator) uses an expression populated by a variable to get the source directory information.

The file name and extension is fetched into a variable which will be used during the processing and subsequent renaming.

Overall package configuration showing the For Each File Iterator 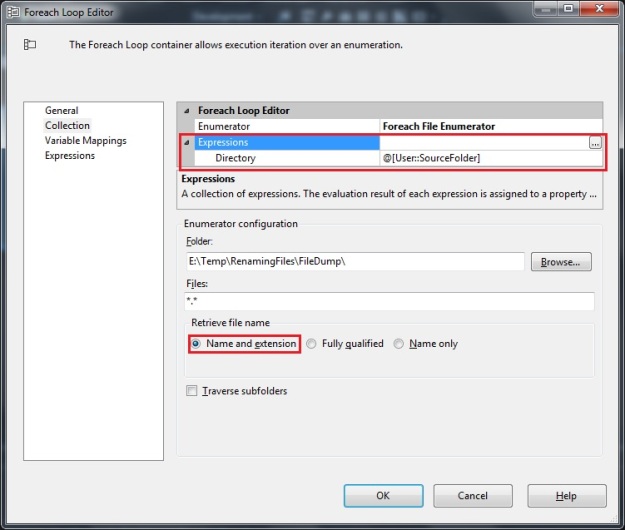 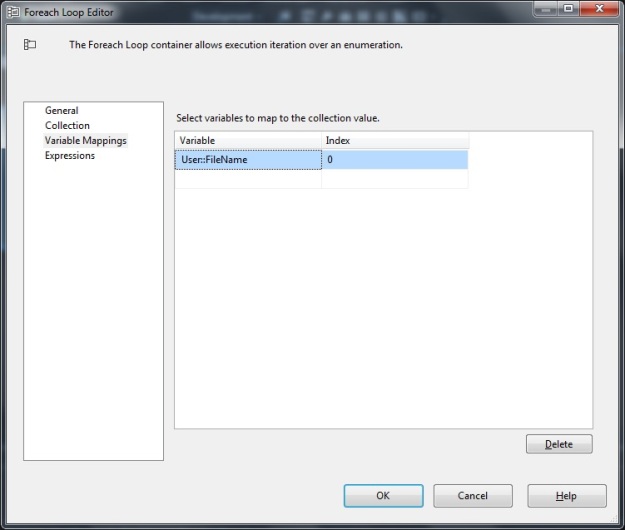 Fetching the individual file name & extension into a variable

Now, I create a new user variable “OutputFileName” and use the expression below to generate the output file name. The expression has essentially 3 distinct parts:

This variable is now used in the configuration of the file system task which is responsible for renaming the file.

The file system task is an extremely flexible task component in SSIS. It can operate on the file system not only by using file connections but also on the basis of variables! For our problem, we will leverage this flexibility of the File System task.

As can be seen from the screenshot below, my File System task has been configured as follows:

Once the package is executed, we can see that the files in the source folder are now updated as expected.

Source Folder with the File Names updated as expected

One of the SSIS related questions that I see often in the forums is around the ability to control the sequence in which a For Each Loop processes the files from a directory. When performing data movement as part of an ETL or an integration, it may be required to work asynchronously. The “sender” of the data may place the files in a folder for the data processing to pickup. These files generally contain ordered data that needs to be loaded in a specific sequence.

The problem is that the SSIS For Each Loop container does not have the provision that allows a user to specify the order in which the files are to be processed. Today, I present one of the workarounds that I came up with (there may be others, and I would be very interested to know what do you prefer in these scenarios).

To demonstrate the ordered loading of files, I created a set of simple files  and a table to which I will be adding the data read from these files.

Folder showing files to process in the required non-alphabetical order

Core Logic – Identify the Order of the Files to Process

The For Each container is just a mechanism to loop through a set (of objects/files/records). It does not have the provision to control the order in which the set is to be iterated through.

As shown below, I pass the path to the folder where the files are located, and accept the sorted list into an object.

The script used within the script task which is also the heart of this solution is provided below.

The  next stage is simply to process the file.

Screenshots showing these bits of the configuration are provided below. 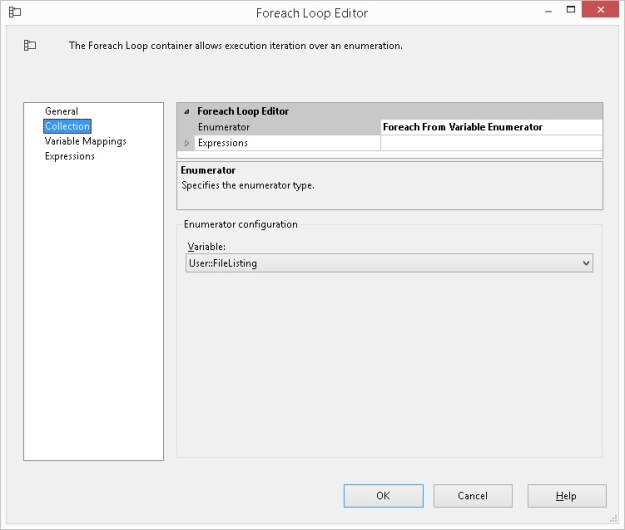 For Each Loop Iteration Configuration

For Each Loop File Name configuration

If I execute the SSIS package and then query the destination table, we see that the files were indeed ordered in the expected order.

I often receive questions related to debugging code using SSMS. Based on these questions, I have written a lot of blog posts in the past, however I was recently asked the question:

How can I debug a DML trigger in SSMS?

I realized that while I had encountered the same question and researched it in my initial days (when I worked on SQL Server 2000), I had never written about it. So, here goes.

In order to demonstrate how to debug a trigger, all we need to do is debug the statement that initiates the trigger.

For this demonstration, I will fire an update on the [Sales].[SalesOrderHeader] table of the AdventureWorks database.

When we debug this query (using F10), the SSMS debugger launches and we can step through the code using the same key combinations as we have in Visual Studio. 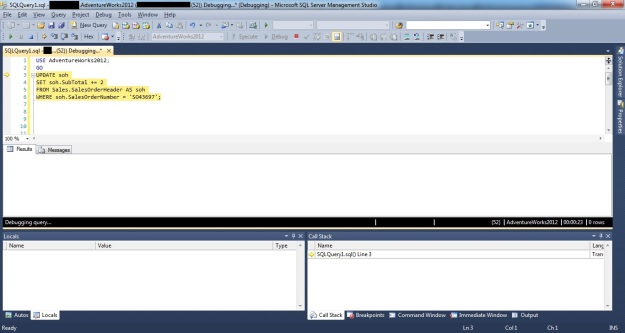 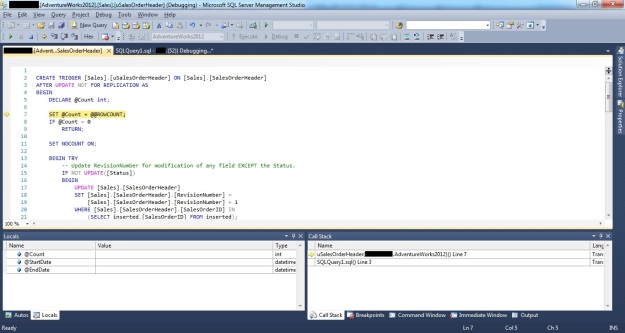 That’s it. Debugging a trigger is no different than debugging a stored procedure or any other T-SQL script.

Until we meet next time,
Be courteous. Drive responsibly.